A deliciously different gin from the Black Forest region in Germany. 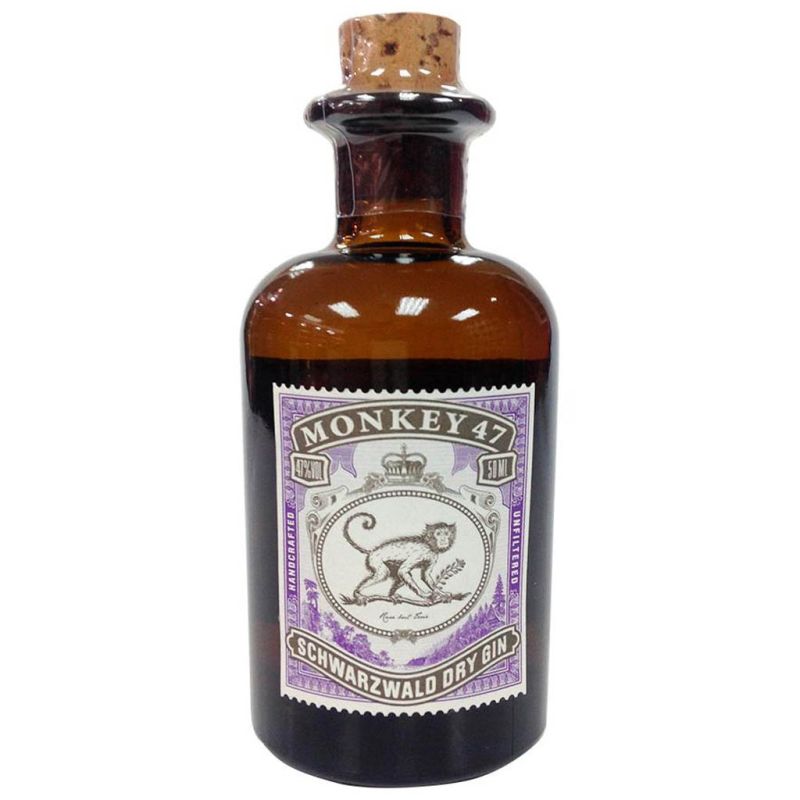 The history behind Monkey 47 starts with Montgomery Collins. His childhood was in East Asia as the son of a diplomat, after which he became an officer in the British RAF (Royal Air Force). After the war, he was stationed in Berlin and was devastated by the destruction he saw there.

A growing love for Germany meant he spent much time helping reconstruction efforts, including many housing estates - but also Berlin Zoo. It was here he sponsored an Egret Monkey... Max.

After leaving the RAF his love for Germany meant he decided to stay, and eventually settled in the Black Forest. Here he set about trying to create a gin. Unfortunately, during his lifetime he didnt have much success in these endeavours.

In the 1960's during rennovation work, a small wooden box was unearthed. Inside was found an individual bottle named 'Max the Monkey – Schwarzwald Gin'. Luckily there was also a letter which had a description of the botanicals which Collins had used in the gins creation.

The current creator of Monkey 47's latest itteration is Alexander Stein, who has heritage in the drinks trade. Along with his partner Christoph Keller (a distiller), they have brought Monkey 47 into the modern day.

They use a total of 47 botanicals (hence the name), a large number of which come from the Black Forest region. Whilst the full recipe is obviously a secret, it's known to include cardamom, cloves, nutmeg, almond, ginger, Ceylon cinnamon, liquorice, Acorus calamus, bitter orange, lemon, spruce tips, lavender, iris, honeysuckle, blackberries, pomelo, lingonberry, sloe berries, sage and verbena.

On the nose, the juniper is definitely present - but more as a back drop. This is a herbal gin, and this is felt in the aroma, with rosemary, cloves and even a hint of earthy mushroom.

These herbal notes continue on the palate, with fresh rosemary, green leaves and a subtle yet spicy black pepper tickles the tongue. Woody, and earthy with almost a hint of smoke.

Surprisingly, towards the finish more flavours come through, with a delicious hit of sweet fruits, blueberries, orange, crisp green apples and ripened peaches. The final flourish is dry, and lingers perfectly.

An intruiging gin, this can be sipped to enjoy the nuances found within. It also works perfectly in a Gin & Tonic, 50ml of gin to 150ml of a neutral tonic works perfectly (lots of ice and a large glass).

For a special occasion such as a birthday, Christmas or a Tuesday, try a Breakfast Martini. In a cocktail shaker add 1 tablespoon of English Orange Marmelade and 50ml of Monkey 47 Gin. Stir well until the marmelade dissolves, and then add plenty of ice, 15ml of Cointreau and 20ml of fresh lemon juice. Shake well and strain into a martini glass. Garnish with some orange zest.